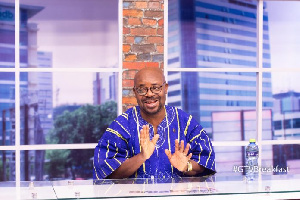 A Gynecologist, Dr. Kennedy Tettey Coffie Brightson, says women could get vaginal infections through the wearing of wrong underpants.

According to him, wearing a “G-string” could be problematic.

Speaking on the GTV Breakfast Show, on January 27, 2022, Dr. Coffie Brightson spoke of why the wearing of “G-String” could cause infections.

“Yes …….a lot of women you know there is this thing they call it “G string”, okay you know the thongs and things like that, and instead of having a proper underwear, pants, that has a spaces where you put a panty liner, you see the panty liner is like a door.

“Yes so when you put a panty liner in your pant you wear, the pantry liner goes to heat the vulva. ……..Yes, it covers the vulva. Sometimes you can get an infection even through the pant”, he noted.

The Gynecologist explained that often the strings do not properly cover the Vagina, leaving it prone to outside impurities.

“Particularly those panties that have a lace-like structure and form, there are holes in there. So now, when you wear those pants, ……….the strings and the thongs, they don’t actually cover you properly, they pass through the lines in between your buttocks”.

He demonstrated how wearing “G-String” could cause a vaginal infection especially after using the washroom.

“You move up and down, so the bacteria around the anus you pull it into the Vagina, Vagina to the anus, anus to the vagina………………and it infects the Vulva with the bacteria”, according to the Gynecologist.

Dr. Kennedy Tettey Coffie Brightson said he is not advising women against the use of ”G-Strings”, however, women who want to use that kind of panty should ensure the panties are clean.