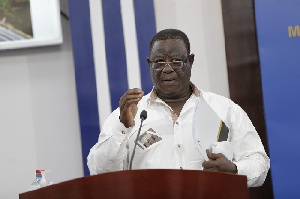 The Municipal Chief Executive (MCE) for Kwabre East Municipal Assembly in the Ashanti Region, Mr. Opoku Agyemang Bonsu has visited the Roads and Highway Minister, Kwesi Amoako Atta to discuss and to seek clarifications on the state of Kwabre roads.

The visit to the Minister’s office took place Wednesday, January 26, 2022.

The Minister on his part assured the MCE, that very soon, Kwabre roads will see some facelift.

According to him, all the paper works have been done awaiting approval from some appropriate quarters.

“By the close of this year Kwabre roads will see some facelift, therefore, the good people of Kwabre East should continue to exercise some restraint,” the roads minister explained.

“In fact, the NPP’s government still remembers the overwhelming support the chiefs and people of the area exhibited during the 2020 elections, and the government shall reward them accordingly,” he said.

Going further, Mr. Bonsu visited the area’s Member of Parliament, Madam Francisca Oteng Mensah at Parliament to have a discussion on how to complete the Mamponteng market and other uncompleted projects embarked on by the previous and the current government in the municipality.

Mr. Bonsu concluded that his regime shall see a continuation of all projects and newly introduced ones.