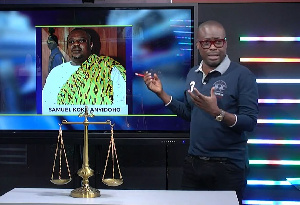 Some respected dignitaries have been lined up as speakers

Paul Adom-Otchere, the host of Good Evening Ghana, GEG, has indicated that, former President John Dramani Mahama is using some calibre of individuals who were perceived to be close to the late Prof John Evans Atta Mills to smash out Samuel Koku Anyidoho from the legacy of their former boss.

According to him, for John Dramani Mahama to achieve his ambition of becoming the next President of Ghana, he needs to deal with Koku Anyidoho, who has since the passing of Prof Mills, established the Atta Mills Institute to continue with the legacy of the late President.

He said, 2022 marks exactly 10 years of the passing of Prof Mills, and Koku Anyidoho has for the past 10 years articulated the vision and legacy of Prof Mills, therefore, his name has become synonymous with Prof Mills, so, in order to remove the ‘Anyidoho’ name from Prof Mills, Mahama has put together some ‘big’ names to launch a legacy project for Prof Mills.

“Everybody thinks of Mills and think of Koku Anyidoho and the Mahama people do not like that; so, they put together a plan, a very very interesting plan and that is why we say that they are removing the heritage of Mills from the clause of Koku Anyidoho and restore it unto the ivory tower,” Paul Adom-Otchere stated as part of his editorial on Good Evening Ghana.

He described the Mahama camp putting together Kwame Pianim, Prof Akua Kuenyehia, Prof Francis Dodoo and Dr. Esther Ofei-Aboagye, as a “masterstroke from the stables of John Mahama.”

“Now, you see what he [Mahama] has done. So, Koku Anyidoho owns the thing; John Dramani Mahama and his advisors sit quietly and they think that the way to wash this Anyidoho thing away is to raise the calibre of the event. Raise the calibre, bring serious people. Calibre is what John Mahama is using as a weapon to smash out Mr. Anyidoho.

“One would ask, why hasn’t Mr. Anyidoho constituted his Atta Mills institute and thought about calibre and add other people and set it up right; that’s the point,” Adom-Otchere stressed.

He said, the people John Dramani Mahama has lined up are to deal with the “unfortunate rabble-rousing of Koku Anyidoho when he is talking about Atta Mills institute…”

Adom-Otchere alleged that, John Mahama and his team decided to oust the likes of Dr. Kwabena Duffuor from the event because he [Duffuor] has shown interest in contesting for the NDC flagbearship race.

He, therefore, advised Koku Anyidoho to bring onboard people like Dr. Kwabena Duffuor and Yaw Osafo Maafo to also raise the calibre of his event.

“Koku Anyidoho has refused to pay attention to calibre, it is not always about glam. Koku Anyidoho did not build calibre for the legendary Professor; what he can do is invite other people to join his – Osafo Maafo, Dr. Duffuor, others in NDC who feel sidelined,” Adom-Otchere stressed.