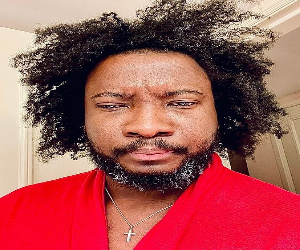 Sonnie Badu to cut his afro

Fans beg Sonnie Badu not to cut his hair

Gospel musician, Dr Sonnie Badu, is ditching his afro for short hair as he has announced in a Facebook post, the plans to get a clean shave.

The minister of the gospel who is based in the United Kingdom has for months kept his hair untouched just like Sampson in the Bible.

Although his hair appeared short, a recent photo shared by Dr Badu shows that it has grown in inches. If straightened out, the singer’s hair can be up to his shoulder level.

However, he has revealed that he is ditching his old look if his wife approves it.

“Finally going to cut the hair … what do you think? Ivory Coast so you want to see me with it or without? Let me know, my wife has the final say tho lol,” said Sonnie Badu who is expected to hold a concert this April in Ivory Coast.

His question has attracted mixed reactions from fans.

Whilst others were heartbroken with the news, a section of his followers noted that they are in support as his current look doesn’t befit a gospel musician.

Isaac Essel wrote: “You have no idea the power you possess for having that hair. Don’t cut it Sir!”

Kuukua Frimpomaa added: “Papa don’t cut your hair it’s fine like this just twist it for me and you are good to go.”

For those not in favour, David Aryee, had this to say about Dr Sonnie Badu’s hair. He wrote: “A good trimming will be good and much decent. Stay blessed.”

Jonathan Alenkhe also added: “Cut the Hair. I will keep saying it, even though some fans here, are insulting me for my opinion. The first time I said it, I was insulted here.”