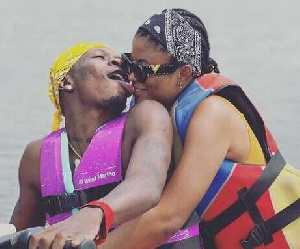 Shatta Wale with his girlfriend

Ghanaian dancehall act Charles Nii Armah , known in entertainment circles as Shatta Wale has disclosed his newly found girlfriend asked him not to post his Ranger Rover gift to her on social media.

Shatta Wale after his break up with his long time girlfriend and Baby Mama Shatta Michy, was recently spotted with another lady on social media believed to be the ‘Landlord’ hitmaker’s girlfriend.

The Dancehall act after the videos surfaced on the internet did not deny his relationship with the said lady.

He has since been posting romantic texts on social media, especially his snap stories.

In one post, he announced that his newly found love was a “God sent accountant” to help him spend his monies wisely and another expressing his love after he was served “breakfast in bed.”

In a recent story, the “1Don” hitmaker disclosed that his highly praised girlfriend asked him not to share photos of a Range Rover car he bought for her on social media.

“Bought a Range for my bae yesterday and she said hun please don’t post it on social media,” the post read.

In good fate, Shatta Wale who is described as an “attention seeker” by most entertainment pundits is seemed to have listened to his girlfriend and has not posted any pictures of the car.

Shatta Wale’s newly found girlfriend is believed to be named ‘Freda’ since most of the ‘Dancehall King’s’ posts referred to her as that.