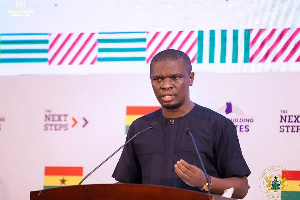 Mustapha Ussif, the Youth and Sports Minister has debunked claims that Ghana spent $25 million on Ghana’s campaign at the 2021 Africa Cup of Nations.

Speaking on the floor of parliament on Wednesday, January 26, 2022, Mustapha Ussif explained that the nation the fundraising campaign embarked on by the government only accrue $2million.

According to him, the state did not spend their entire $25 million on the Black Stars campaign at the AFCON 2021.

“The target we were trying to raise was $25 million. For the record, I have to make the clarity that the $25 million was a fundraising drive to sporting events but not the amount that was given for the Black Stars AFCON campaign,” he said.

Mustapha Ussif also stated that his outfit has not been able to relish the complete $25 million target they have set for themselves.

“Prior to our departure for the campaign, I announced to the people of Ghana that out of the fundraising drive seeking to support the national team, the ministry has been able to realize $2 million out of the set target of $25 million,” the Sports Minister revealed.

The Sports Ministry in collaboration with President Nana Addo Dankwa Akufo-Addo set up a fund to raise $25 million for upcoming sporting events including the AFCON and World Cup.