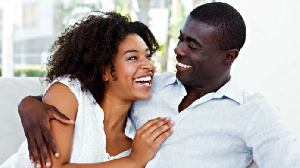 File Photo of a happy couple

Dr. Mary Anane Mensah, Chairperson for the College of Counseling and Psychology, has emphasized that it is important for couples to spend time knowing themselves before marriage.

According to her, marriage is not as simple as it sounds and people will like to give it their own meanings and interpretations but at the end of the day, it’s the expectation of every couple to get married and be able to stay together, find joy and happiness in the relationship.

“This is why all couples need to go through a psychology test before marriage. Most of the time, it becomes a problem after they’ve been through the honeymoon and they start getting used to each other”.

She stated that many people have things coming up in marriage they did not expect and sometimes, they are heard saying all sorts of things about their partners and reasons why they got married to them.

Talking to Rev Nyansa Boakwa on Happy 98.9 FM’s NsemPii she shared, “The reality is that, as human beings, we don’t even understand ourselves fully not to talk of understanding the other person. So we do these tests to help people understand themselves and each other before and after marriage”.

She discussed that before this is done, spouses first need to understand each other as individuals where, “You should know who a wife or husband is. So if you don’t have an understanding of yourself first, you become a walking confusion” she said.

She believes it is very possible for someone not to know who they really are.

She shared that some ways to find out, at a certain point in your life are when you start exhibiting certain behaviors which might come as strange to you the individual.

“For instance, something happens and it gets you very angry, you blow up and you end up saying things which you are later ashamed of. Then after a while, you sit back and ask why you couldn’t control yourself”.

She explained that these are some of the things we have to understand about ourselves.

She cited another example saying, “Sometimes, certain things come out of you instinctively which makes you react in a way that surprises you as an individual and people who know you and sometimes it’s even disgusting to the people who don’t know you”.

Dr. Mary noted that it is easy to fall into this kind of situation when you do not understand yourself hence the need for couples to know themselves before getting married.