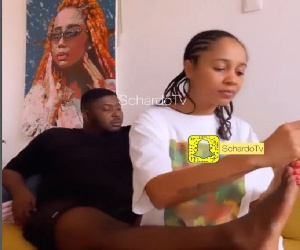 Sister Deborah has sent a subtle message to the former girlfriends of her new boyfriend in a video that captured her caressing and painting the nails of her melanin king.

Her message is simple, she is not leaving her boyfriend despite the allegations and rumours about him.

Weeks after disclosing the identity of her new man and announcing that she was in a new relationship following her terrible breakup with rapper Medikal in 2018, some women including socialite and self-acclaimed sex worker, Queen Facardi, confirmed that they were one-time lovers of her man.

Just last weekend, another young lady who claimed to be a repented call girl alleged that the singer’s boyfriend fathered a child with her, becoming the second known baby-mama of Sister Deborah’s boyfriend.

Although the ‘Uncle Obama’ hitmaker has not responded to any of these women, she recently posted a video of herself and her man all loved-up in their room.

There were reports that the two had broken up based on all the rumours but Sister Derby’s snap confirms that they are still strong!