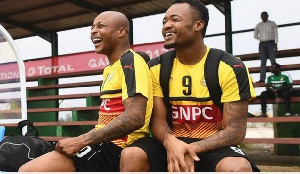 Black Stars captain, Andre Dede Ayew and his brother Jordan Ayew are reported to have decided to quit the Black Stars.

The two sons of Abedi Ayew Pele have been part of the national team in the last decade with Andre Dede Ayew cementing his place in the history books as Ghana’s top scorer in the Africa Cup of Nations with ten goals.

Footballghana.com reported on Wednesday, January 26, 2022, that the two brothers decided to quit the national team because of the media attacks targeted at them.

Ghanaians on social media have been divided on whether or not the news will be in the good interest of the Black Stars.

Some have stated that it’s has been long overdue for the duo to step away from the Black Stars since they have tried on numerous occasions but have failed to win gold with the team.

Meanwhile, a source close to the family has told GhanaWeb that the reports have no iota truth and must be ignored.

I remember i asked some guys, “if Dede Ayew has a powerful juju, then why is he not playing for PSG or Bayern, why can’t he use the juju to win us Afcon and probably win best player in Africa”

They said his juju can’t work on the whites and nobody uses juju for better things https://t.co/qDQvLcKt8Y

Ask most of these players and they’ll mention some pastor or osofo is their spiritual father(s). Is that also not a form of spiritual backing or because its christian related so it isn’t considered one?
Throw Dede’s name out because you hate him.

Per rumours Dede Ayew and his brother Jordan Ayew have decided to tske some time off the Black Stars,they had a meeting with their father and the family decided it’ll be best to quit playing for the national team for now.
We thank them for their services to Ghana. pic.twitter.com/xiHS7jZ1Ve

Andre Dede Ayew and his brother,Jordan set to quit the Black Stars of Ghana team. pic.twitter.com/sLGYrhTtcI

But i think nobody plays with passion pass Dede Ayew for this current blackstar team… So why you all happy about his quit?

The Blackstars problem isn’t the Ayew brothers. Dede Ayew is most consistent player in the team since he got promoted into the senior side after leading U20 to winning Ghana’s first World Cup in 2009. GFA must STOP interfering in player selection process. That’s the problem.

All Dede Ayew has done is to sacrifice the talent of others for his selfish interest. This current team is supposed to be captained by Kwadwo Asamoah, not Dede Ayew. — his reign as a captain has seen the worse of Black Stars performance.

We need Dede so Jordan can quit

Reports coming in late Wednesday, January 26, 2022 are suggesting that both Andre Dede Ayew and Jordan Ayew have decided to quit Black Stars. pic.twitter.com/fozrnIxzHR

Make dede Ayew and his Brother Jordan Ayew comot for there. Blackstars can do better with you duo tttww

I wonder the offense of Dede and Jordan, after all their efforts.

If these two quit, Asamoah Gyan can now go shred some weight, stay active and take over Black Stars as he had always wished !! pic.twitter.com/oIAtjcR9kF

Y’all are so rude. Dede has given so much to the Black Stars https://t.co/aQRccC7eSk