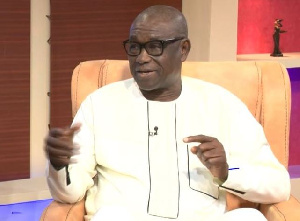 Member of Parliament for Talensi Benson Tongo Baba has said the Ghana Football Association (GFA) itself needs to be reshuffled by the footballing people.

He said the government cannot do that because of FIFA regulations hence the General Assembly of the FA must act to that effect.

Contributing to a debate on the floor of Parliament on Wednesday, January 26, the former President of the Ghana Olympic Committee (GOC) said: “The FA itself should be reshuffled. They deserved to be removed not by government because of the long hand of FIFA or the international sports federation but by their own constituents.

“Those who constitute the General Assembly of the FA must rise up to this challenge. They have the opportunity of telling the whole country that they did not hire Kwasi Appiah, they brought in CK Akonnor but we have performed badly, they brought Milovan and they have asked him to also go home.

“Let those who were doing the search and appointing the people, the Black Stars Management Committee continue to be in office? The FA has every right to remove that group pending their own congress to account for their stewardship to the people of this country.”

For his part, the Member of Parliament for Adansi Asokwa, Kobina Tahir Hammond asked managers of Ghana football to attach seriousness to the work they are doing and ensure that the team becomes formidable again.

Also contributing to a discussion on the floor of the House on Wednesday, January 26, KT Hammond indicated that the Black Stars remains the only uniting factor in Ghana hence the need for the football administrators to take that enterprise seriously.

He further called for the sacking of the coach of the team Milovan Ravejac if that has not been done already by the Ghana Football Association (GFA).

“Mr Speaker, here we are with the Ghana Black Stars we hear about segmentations, we hear about infighting, the 22 or 23 players represent a population of over 30 million.

“Football is the only thing that links us together as a nation and yet the Black Stars consistently let us down,” he said.

He added “Football is a very serious business in Ghana, you journalists, tell those who are playing at the helm of affairs that they shouldn’t mess up our country.

“Ghana is the only place that if we we are going to play God has to be our goal keeper or striker. God has soo much to do that he is always being called. Mr Sports Minister sack the coach if you haven’t done that already or you yourself will be sacked. Let us not waste money on bad coaches of that caliber, it is not good . Let us get our locally trained coach to partner the boys.

Meanwhile, Milovan Rajevac was reportedly sacked following the humiliation the team suffered in the 2021 Africa Cup of Nations (AFCON) in Cameroon.

The discussions, according to the Ministry, was frank and forward-looking, and they have asked the GFA to review the work of under-fire coach Milovan Rajevac and reconstitute the Black Stars management committee.

‪“Following the meeting, the Ministry, in accordance with its mandate, asked the Ghana Football Association to reconstitute the Black Stars management committee,” a statement signed by Sports Minister Mustapha Ussif read.

Apparently, Mr Osei-Owusu had indicated that he was counted as part of the Members present on Tuesday for the approval of the 2022 budget statement and government’s economic policy because he also wore the cap of an MP.

“When a [Deputy] Speaker rules that he is not the Speaker, then the Speaker would have to come and sit on his seat and take decision on that,” Mr Norgbey said.

He shied away from saying whether he regrets his action but said so far as the Speaker was not on the seat before he pulled it, there was nothing wrong with it.

“The clerk, everybody touches the Speaker’s seat. It is just a normal thing.”