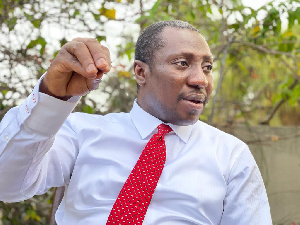 Deputy Majority Leader Alexander Afenyo-Markin says but for the ravages of the Covid-19 pandemic on the Ghanaian economy, the Electronics Transfer Levy, popularly known as e-levy, would not have been introduced by the government.

He said the effects of the pandemic not only on the Ghanaian economy but the world’s economy demanded that prudent measures are taken to speed up recovery efforts.

Joining speakers at a townhall meeting in Koforidua on the controversial policy on Thursday, January 27, Mr Afenyo-Markin, who is also the Member of Parliament for Effutu Constituency, said the economy was doing well under President Nana Addo Dankwa Akufo-Addo prior to the deadly disease in 2020.

He said the government, having introduced social-intervention programmes like the Free Senior High School Programme, did not come out with any levies to ensure their sustenance.

Therefore, he opined, the e-levy should be seen as a vital policy to help in keeping major intervention programmes being enjoyed under the current administration.

He said e-levy will ensure that road expansion in the country continues unabated while development also takes place unabated.

For the Minister of Communications and Digitalisation, Ursula Owusu-Ekuful, so far as Ghana is beyond aid, it is important domestic revenue mobilisation is embarked upon.

“We are talking about a Ghana Beyond Aid, we need to be able to finance our own development and stop the dependence on either loans or grants or aid from other countries if we are to be truly independent.”

The Electronics Transfer Levy Bill could not pass after the 2022 budget statement was presented as a result of opposition from the Minority in Parliament.

It is expected to be back in Parliament next week for a final deliberation by members before it is approved or otherwise.

A meeting between the Minister of Finance, Ken Ofori-Atta, with the Minority in Parliament ended inconclusively on Thursday.