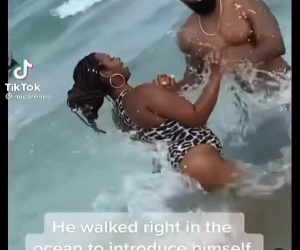 Wife of TikTok user’s mystery man reaches out to her

A woman on TikTok recently asked her followers to help her trace a man whom she met and had fun with during a vacation. Her search, however, landed the wife of this man whom she never knew was married in her DM.

In a video that has attracted tons of reactions, Micarenee, gave the name of her mystery man as ‘Yaw’ a name familiar to Ghanaians. In Ghana, a male child born on Thursday is named Yaw by the Akan tribe.

Micarenee was pictured with Yaw at a beach, however, it is unclear if he had an affair with her. Based on her confession, it seems that she wasn’t aware of his marital status.

“I am counting on Yaw. Hopefully, he ain’t married,” read the caption of the viral TikTok video.

In a separate post, Micarenee pleaded with her fans to continue with the search as there was no sign of him. She wrote: “UPDATE: Still haven’t found him yet. Keep doing Yaw thing for me.”

Days after her second post, a woman reached out to her by sending Micarenee the contact of Yaw.

It wasn’t long before she realized that the woman in her DM was the wife of her mystery man, Yaw.

“Sis I’m so sorry. Had no clue something like would happen I wish the best for you and your kids I won’t be reaching out to him,” Micarenee replied in the private message.

The surprised wife, begged her not to take down the videos for fear of her husband denying that he was with another woman. Micarenee on the other hand gladly accepted to keep the videos on her TikTok account.