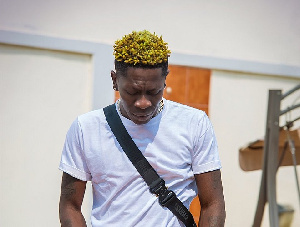 Shatta Wale and three others arrested for fake prank

Lawyers for Charles Nii Armah Mensah Jnr popularly known as Shatta Wale have pleaded with the Accra Circuit Court 4 to exonerate and release their clients following what they have described as an undue delay of prosecution.

They say their clients were arrested with speed and aggression; yet, for the last three months, processes to ensure prosecution have been slow.

According to a myjoyonline report, the lawyers, Jerry Avenogbor, Andrew Vortia and Samuel Ofori, deplored the consistent suspension of the court proceedings.

The Dancehall musician and his team members on October 18, 2021, allegedly published false news about the singer being shot by some unknown gunmen, claiming he was receiving treatment at an unidentified medical facility.

The four pleaded not guilty of all charges against them when they appeared in court.

Meanwhile, the Prosecutor, Chief Inspector Denis Terkpetey Esq, has accused Shatta’s lawyers of hiding another suspect cited in the matter.

He insisted if the suspect is not brought before the court, he would use any available means to arrest the said suspect.