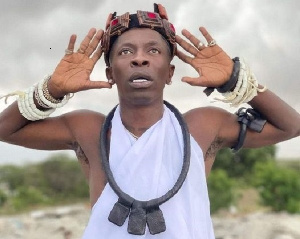 Shatta Wale confirms that he is a spirit

Shatta Wale on Wednesday published a snippet of an interview where a Ghanaian prophet claimed that the singer was a ‘spirit’.

He shared the video on his Facebook page to confirm the claim made by the prophet.

The preacher who calls himself ‘The Lion of Africa’, noted that Charles Nii Armah Mensah, better known as Shatta Wale is no man to play with.

He again cautioned prophets to stay away from him because he has a stronger spirit backing him.

In an interview on ‘Efie Nsem Aye Hu’, he called on Ghanaian prophets to concentrate on their church members who are in dire need of prayers and prophecies instead of targeting the leader of the Shatta Movement.

“Why waste your time on Shatta Wale whilst you can dedicate that time prophesying to one of your church members who might need it? God has already blessed him so there’s no need to request that people pray for him. He knows the principles and the keys,” said the prophet.

He again noted that Ghana’s Inspector General of Police, Dr George Akuffo Dampare, is not against preachers, but instead he is just doing his job.

It would be recalled that Shatta Wale was in 2021 arrested and remanded into prison custody over a fake gun following a prophecy by Jesus Ahoufe who claimed that the artiste would be shot and killed on October 18.

The celebrated dancehall musician explained that he sacrificed his freedom by faking the attack as a means of fighting against fake prophets who only prophesy doom for celebrities in Ghana.