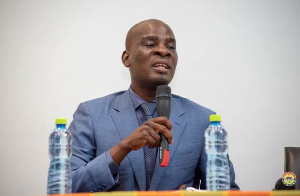 Haruna Iddrisu is Leader of the Minority caucus in Parliament

The Minority Leader in Parliament, Haruna Iddrisu, has expressed concerns about the attempt by the Minister of Youth and Sports, Mustapha Ussif, to determine the work output of the coach of the Black Stars, Milovan Rajevac.

He explained that while the entire country is unhappy about the performance of the team in the ongoing Africa Cup of Nations in Cameroon, it is contravening for the minister to want to take on a responsibility that does not fall within his mandate.

Speaking to GhanaWeb in Parliament, Haruna Iddrisu challenged the authority of the Sports Minister, stating that not even the Ghana Football Association rules give him that mandate to operate.

“Our Ranking Member on Defence Committee, I listened to members’ contribution on the abysmal performance of the national team, the Black Stars, in the ongoing Africa Cup of Nations tournament in Cameroon. Justifiably, Ghanaians are unhappy, justifiably, Ghanaians are disappointed in the Black Stars, the team itself, in the management and probably the coach but let me state that the Minister for Youth and Sports, the Honorable Mustapha Ussif, has no authority, no mandate, to dismiss, sack or make an announcement or in his words, review of the national coach, Milo.

“So, to hear that there was a meeting and that there was an announcement, that was premature and that is ultra vires. The football rules and regulations from FIFA through GFA do not put the mandate of determining a coach and determining his exit in the hands of the minister; a politician,” he said.

Ghana took an early exit from the AFCON after it lost its last Group Stage game to debutants, Comoros, coming out with only a point from the tournament.