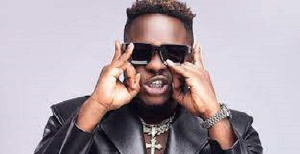 Medikal arrested for brandishing a gun

Medikal requests for his gun during court hearing

Ghanaian rapper Samuel Adu Frimpong popularly known in the music industry as Medikal has sent out words to those who wish his downfall.

According to the artiste, whoever prays he doesn’t chalk success in life will also not achieve any accomplishment.

The rapper said this after he appeared in court on January 25 with Shatta Wale for offences they allegedly committed last year.

The ‘omo ada’ artiste when he appeared in court begged the Accra Circuit Court to direct the police to release his gun that was confiscated in 2021.

Kasapafmonline.com reported that the singer requested his gun back and pleaded not guilty to the charge of displaying arms and ammunition.

Medikal was arrested for brandishing a gun on social media.

The Ghana Police Service in October 2021 picked up the rapper for interrogation and later handed him over to the Regional Criminal Investigations Department for further investigations.

He was remanded to prison custody for five days and subsequently granted bail of GH¢100,000.

According to Kasapafmonline.com, counsel for the rapper, Alice Nimako Debrah Ablormeti, who appeared in court on January 25, 2022, disclosed that they have not been served with the processes and disclosures to properly mount their defence.