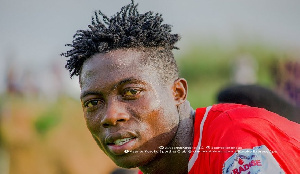 New Asante Kotoko signing Justice Blay trained with his new teammates for the first since returning to the club.

Blay on Tuesday took part in the team’s training session at the Adako Jachie training grounds as they prepare for the Ghana Premier League game against Great Olympics.

The midfielder was introduced to his new teammates before taking part in the training session.

He is expected to feature for the club when the second transfer window opens on February 1.

Blay joins the Porcupines Warriors on a free transfer following the expiration of his contract.

The hard-working midfielder signed a two-year deal with the club.

He spent the 2019/20 season on loan at Kotoko, where he established himself as a vital member of the team.

The seasoned midfielder scored twice in 17 appearances across all competitions.

After his loan term with Kotoko ended in June 2020, he returned to Medeama. In the previous season, he appeared in 19 games and scored three goals.