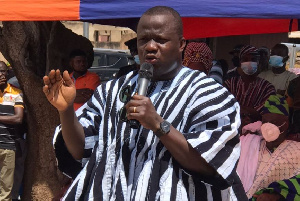 Asking companies at centre of the explosion to support victims wrong, MP

The Minister for Lands and Natural Resources, Samuel Abu Jinapor, has said the Apiate Support Fund is not supported by any proceeds from civil liabilities or insurance claims.

According to the minister, the fund is only an initiative of government to raise funds to support the victims of the explosion at Apiate.

In an interview on Joy FM’s Super Morning Show, Abu Jinapor said the fund was not joined to any insurance owned by the parties involved in the accident.

“What we are doing is not mutually exclusive. It’s not conjoined or prejudicial or has any impact on any other claim. As you know, in situations like this, there are all kinds of liabilities that will arise and the criminal aspect as well. So this is absolutely without prejudice. This is just government putting in place a framework to raise funds to support the victims,” he said.

Abu Jinapor also said contrary to suggestions, it would be wrong for the government to force the companies party to the accident to make contributions to the fund since the explosion is currently under investigation.

“I don’t think it’s the correct way to approach the situation. There are investigations ongoing. If they want to make donations voluntarily, I think that would be up to them but I don’t see how as a Ministry, we should be soliciting for funds from them, given that they are at the centre of the incident. I don’t know how ethical this would be.

“What we have done is that we have offers and gestures from all manner of institutions and individuals to support the victims and that’s very Ghanaian and the government thinks that it is important that we synchronise and sanitize that and have this independent body of renowned individuals being responsible for this,” he added.