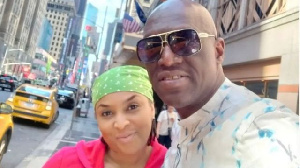 US-based woman says she had sex with gospel artiste

The United States-based woman impregnated by popular Nigerian gospel singer Sammie Okposo has said the musician mounted pressure on her to abort her unborn baby.

According to the woman with the alias, African Doll, Sammie Okposo forced her to get rid of the baby after she informed him of the pregnancy which she refused.

African Doll made this claim in an interview with Nigerian YouTuber, Obodo Naija TV, on January 24, 2022.

“After I left the hospital and called him, he told me to do the needful and get rid of the child after I told him I was pregnant.

“He blocked me and called me names when the issue of the baby came up,” she affirmed.

To prove her claims were true, she shared screenshots of their chats and his reactions after she informed him.

The Texas-based native also in the interview detailed how she met the gospel artiste in the US in November 2021.

“We met at a concert in one church close to my home and we started following each other on Instagram. He asked for my number from Instagram and we started conversing regularly.

She went on to detail how she was invited by the gospel artiste to Nigeria and still had sex with him on countless occasions.

Meanwhile, she has admitted that she was wrong for sleeping with a married man.

“I know it’s wrong what I did sleeping with a married man and tried to communicate with him so we can find a way out but he kept telling me I’m trying to disgrace him,” she said.