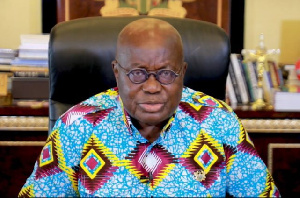 The Tema East Constituency Chairman of the ruling New Patriotic Party (NPP), Nene Agbadiagba Ofoe-Teye, has reiterated that President Akufo-Addo is a far better manager of the economy than his predecessor, former President John Mahama.

In a post on social media, Nene Agbadiagba Ofoe-Teye cited the country’s comfortable import cover, in spite of the ravaging effects on the coronavirus disease (COVID-19) around the world as evidence.

According to him, “the country’s current import cover is more than five months as reported by the Ministry of Finance.

Compare that to the import cover that we had under John Mahama which was just two months and the evidence is clear that even Akufo-Addo’s worst-case scenario is better than Mahama’s best-case scenario.”

The Tema East NPP Chairman’s argument is obviously premised on the revelation by Finance Minister, Ken Ofori-Atta that the country has import cover over five months.

Such import cover has been better than what Ghana has had for over 20 years.

Mr. Ofori-Atta had reported thus, “We have over 5 months import cover which is well above our internal target of 4 months and better than the average over the previous two decades.”

Nene Agbadiagba Ofoe-Teye explained that the import cover is the amount of financial buffer available to Ghana to import all its needs if the country’s economy were to collapse and totally become incapable of producing anything.

“What this means is that, the fundamentals of the economy are so good that if our economy were to collapse and we were unable to produce anything for ourselves, something that will never happen, we will be able to depend on the money we have available to import to fend for ourselves for more than five months,” the Tema East NPP chairman wrote.

Nene Agbadiagba Ofoe-Teye, therefore, dismissed claims by critics of the government that it has messed up the finances and economy of the country because of a recent downgrade of the country’s credit ratings to B- by a global rating agency, Fitch.

According to Nene Ofoe-Teye, credit ratings are not permanent and after Ghana has surmounted the COVID-19 challenge, the country will bounce back.