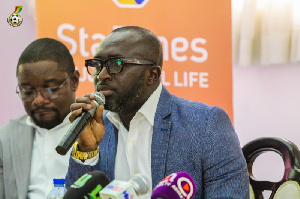 Former Ghana international, Augustine Arhinful has revealed why he will not be successful as Black Stars coach even if the Ghana Football Association parts ways with Milovan Rajevac.

Calls for a change in Black Stars technical bench have become rampant after Ghana’s worst ever campaign in the history of the Africa Cup of Nations.

For the first time in Ghana’s 23 appearances at the Africa Cup of Nations, the Black Stars exited the group stages of the competition without winning a single game in a group that had Morocco, Comoros, and Gabon.

Asked in an interview if he is capable of managing the Black Stars, Augustine Arhinful stated that he has the requisite skills to handle the team as a former player but the system set in place will fight him and make sure that he fails.

“I am capable of coaching Black Stars because I have the certificate that merits to coach any team,” the former Ashgold striker told Kumasi-based Wontumi Radio.

“I know my qualities as a person and as a coach but I prefer to stay focused and do what I love doing because the mentality of our administrators in the country is poor and they can frustrate you to fail and that is ruining our football,” he added.