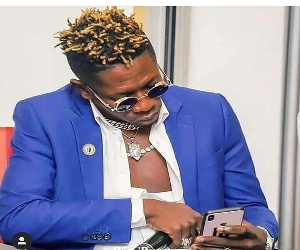 The prosecution in the case in which Dancehall artiste, Charles Nii Armah Mensah popularly, known as Shatta Wale, is facing charges with three others has said the police “will use other means” within the law to arrest the sister of the artiste.

The prosecution is seeking the sister of Shatta Wale who is said to be the person who reported the incident of the alleged fake gunshot to the East Legon Police to assist with investigations.

But after a gentleman agreed between the defense lawyers, the prosecution, and the court for the defense to produce the said suspect, that agreement has been reneged on.

In court on Tuesday, Chief Inspector Dennis Terkpetey, “there was a gentleman’s agreement between counsel, but they are not helping us, so we will use other means.”

Jerry Avenorgbo, counsel for Shatta Wale argued that the architecture of the law existed before now and the prosecution cannot have it changed.

He wondered why a person who volunteered information to the police, should be treated as a suspect.

This according to counsel will put fear in people who had information and want to report to the Police.

He urged on the court to as a matter of urgency commence the trial within the next week.

In his response to that prayer, the prosecutor said, “it is our case and he cannot determine how we should do our case.”

He added, “We were in your chambers (Judge) and we agreed on a gentleman agreement and they have failed to do what is right.”

Shatta Wale is facing one charge of the publication of false news that caused fear and panic in the public domain.

Three others who appeared with him Kojo Owusu Koranteng, Shatta’s assistant, Eric Vanetor, a graphic designer, and Iddrisu Yussif, a beautician were charged for abetment of criminal publication of false news.

They have all pleaded not guilty and were admitted to GHC100,000 each with sureties who should be a public servant.

At the previous court sitting on December 7, 2021, the prosecutor Chief Inspector Dennis Terkpetey told the court that, one more suspect is being pursued.

He prayed the court to urge counsel for the accused persons to produce the said suspects to help the police.

Jerry Avenorgbo, counsel for the accused persons at this point requested for in-camera hearing which was agreed.

Shatta Wale is on a self-recognizance bail of GHC100,000.