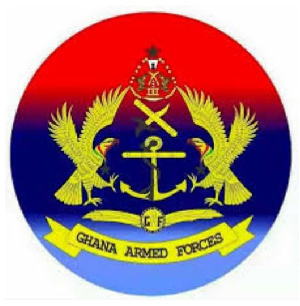 Logo of the Ghana Armed Forces

The GAF said its attention had been drawn to several videos and photos on various social media platforms of the arrest of a car-snatching syndicate alleged to have attacked and snatched a car from a victim at Tamale.

“We wish to state categorically that the suspect is not a soldier of the Ghana Armed Forces,” a statement signed by Commander Andy La-Anyane, Acting Director of Public Relations, GAF, and copied to the Ghana News Agency, said.

The Ghana Police Service in a news brief, said five suspected armed robbers were arrested at Buipe in the Savannah Region after a robbery incident in Tamale.

The suspects, the police said, snatched a Toyota Camry saloon car from its owner at a residential area in Tamale and bolted.

The Police pursued them and succeeded in arresting them at Buipe.

A search on them led to the retrieval of a G3 Rifle and a pistol.

The Ghana Armed Forces said it was worried about the rising spate of impersonation by civilians, either wearing military uniforms or posting of fake pictures of themselves as military officers to defraud unsuspecting Ghanaians.

“The unauthorised sale of military uniforms and military pattern gadgets by some vendors contributes to the situation and is inimical to national security,” it said.

The Ghana Armed Forces, the statement noted, was ready to cooperate with the Police to unravel the source of the military uniform in that incident and to further stop the unauthorised sale of military uniforms across the country.

It urged the public to be confident and provide information to the security agencies to nib the worrying trend in the bud.