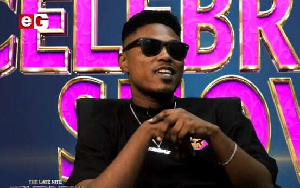 Up-and-coming highlife and afrobeats singer, Twicy, has talked about how he kickstarted his music career at a very young age despite having parents who were unsupportive of him choosing that path.

The singer disclosed during an interview with Foster Romanus on the Late Nite Celebrity Show on eTV Ghana that he has been into music since he got into Senior High School. However, his parents were not exactly in support of this newly found talent and passion at the time.

“Every parent wants to know that their child is on the right path so they put me in school expecting me to learn and focus fully on my education, and I was rather spending part of my time doing music. Not to say that music is not the right path but here in Ghana, starting that kind of profession at such an early stage is not easy”, he explained.

Twicy added that in this part of the world, when a youngster decides to go into music instead of focusing on school, it is not easy for his or her parents and even others who know him or her to accept because they believe school is more important and should come first.

Thankfully, Twicy was able to prove his parents wrong on their notion that he could not merge school with music and they have now accepted it and are in full support of his craft.