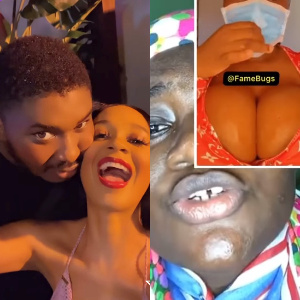 Chocolate Candy claims she slept with David once

A woman identified with the alias Chocolate Candy has claimed she had a baby with Sister Derby’s new boyfriend, David.

In a video that has gone viral on various social media platforms, Chocolate Candy alleged she got pregnant after sleeping with David.

“Farcadi’s baby daddy was also my baby daddy, I met David through social media but we did it just once so he thought it wasn’t his baby. Before, he didn’t want to accept the child but later with prayers he accepted the responsibility.

“Because of prostitution, I got pregnant for David, Farcadi’s baby daddy,” she claimed.

Meanwhile, the lady has sorrowfully said she lost her baby 10 days after he was born.

One can recall that Derby recently flaunted her new ‘talked-about’ boyfriend on social media which sparked countless reactions from Ghanaians.

This was after Twitter users unravelled the identity of Sister Derby’s boyfriend after a video of herself and the unknown man locking lips at a beach in Zanzibar, Tanzania, went viral.

But in another development, it appears more information about the ‘man in question’ has surfaced.

In a bid to disclose some vital information about Sister Derby and her newfound love, the Snapchat blogger by the name Sel the Bomb said;

“Nice to see how Sister Derby is now living happily with David her boo. The dude is Queen Farcadi’s baby daddy. He got a couple of girls before derby but it doesn’t matter now. They should live happily.”

Queen Farcadi on the other hand has affirmed the rumours adding that she is not bothered about her ‘baby daddy’ and Sister Derby’s newfound relationship.

“What’s going on with my baby daddy issues? He is a good father and pays his dues with my kids so what’s up? I love babies so I will keep on making them. You all should let him have fun,” she wrote on Snapchat.