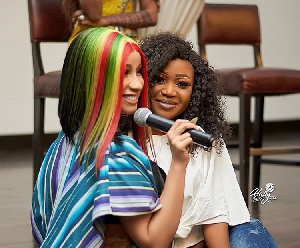 Tasha K fined by US court for defamation

The host of the YouTube channel UnWineWithTashaK, in one of her episodes, alleged that the singer known for hits including Bodak Yellow, Money and WAP had worked as a prostitute for a living.

According to a court document, Tasha K’s comments was false; adding that the YouTuber and her company were found liable for defamation, invasion of privacy through false light portrayal and intentional infliction of emotional distress.

Cardi B, who Akuapem Poloo describes as her ‘spirit twin,’ has since been awarded $1 million for “pain and suffering and/or reputational injury” and an additional $250,000 in medical expenses.

Poloo who was recently granted bail from prison custody shared an image of the rapper to celebrate what she terms their “victory”.

The post read: “Congratulations my beautiful twin sister @iamcardib, Sooo glad to know this. you are God’s own and no weapon formed against you shall proper. Victory is ours.”