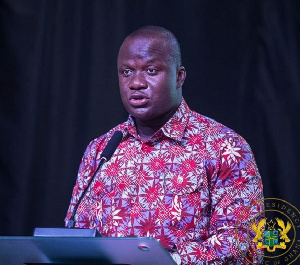 Samuel Abu Jinapor is the Minister of Lands and Natural Resources

A five-member committee has been inaugurated by the Minister of Lands and Natural Resources, Samuel Abu Jinapor, to oversee an endowment fund targeted at helping affected persons in Apiate.

Dubbed the ‘Apiate Support Fund,’ it was set up on the instructions of President Nana Addo Dankwa Akufo-Addo and will be chaired by Dr. Joyce Aryee to help victims of the explosion that occurred in the community on January 20, 2022.

The Fund which is aimed at soliciting support from individuals, corporate institutions and well-meaning Ghanaians, will also be managed by an independent body with supervision from the Ministry of Lands and Natural Resources.

It will also consolidate the individual donations to the victims.

Samuel Abu Jinapor said the establishment of this Fund will among others, support the victims of the incident and reconstruct the Apiate township.

Also, a Ministerial Committee of Inquiry to examine the entire health and safety regime of mining in Ghana has been constituted.

He made this known in a Facebook video on the launch of the Fund and monitored by GhanaWeb.

It would be recalled that last Thursday, January 20, 2022, an explosion at Apiate brought the entire community to its knees.

Lives and properties were lost and the community has since been declared a ghost town.

The Vice President Dr. Mahamudu Bawumia and other high-ranking government officials were in the community the day after to commiserate with them.

The government has since promised to rebuild the community.