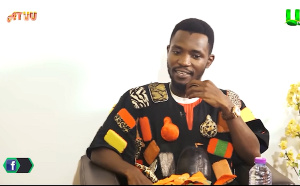 play videoTeacher Kwadwo in an interview with UTV’s Abeiku Santana

Michael Owusu Afriyie, popularly known as ‘Teacher Kwadwo,’ has recounted how he struggled his way into gaining admission to the Teacher Training College.

The embattled teacher said he was compelled to re-sit NOV/DEC four consecutive times after he failed the original West Africa Senior Certificate Examinations(WASCCE).

Teacher Kwadwo said that but for his father, he almost developed ‘cold feet’ and would have given up on his dreams.

“I had my secondary school education at Tweneboa Kodua Senior Secondary School in Kumawu. After school, I stayed home for seven years because my results were bad. I failed a lot of subjects and I had to re-sit four times. At a point, I almost gave up and my father kept on pushing me. I wrote some of the papers in Kumasi and Accra. I have four NOV/DEC certificates and one original WASCCE certificate.

“In all instances, I didn’t prepare well and I know it. I played around a lot and wasn’t serious. I almost gave up to venture into something different. I wanted quick money. I played around during that 7 year period until my mother died. It was a wake-up call for me and I kept on writing the NOV/DEC. I was home one day and a family friend recommended that I should buy training college forms. Initially, I hesitated, I disliked it a lot but upon several thoughts, I bought the forms and it was successful,” he stated in an interview with Abeiku Santana.