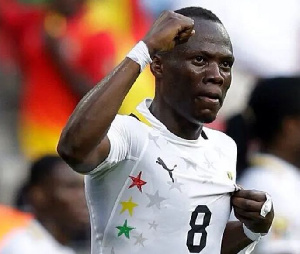 Ghana booted out of AFCON at group stages

Former Ghana international, Emmanuel Agyemang Badu has lashed out on Black Stars players for not putting up a dedicated performance at the 2021 Africa Cup of Nation competition in Cameroon.

According to the former FIFA U-20 World Cup winner, some players don’t know the pride in putting on the national colours.

Ghana managed only one point in the AFCON, losing to Morocco and Comoros and also drawing with Gabon. The Black Stars as a result exited the competition at the group stage.

Speaking to Connect FM, the former Asante Kotoko player said the Black Stars need players who can represent the badge.

“The national team is for every Ghanaian. But it is not every Ghanaian who can play for the Black Stars,” Agyemang-Badu told Connect FM.

“The badge represents the spirit of the nation, so we need players with character to represent us. I think some of the players now don’t know the value of the jersey,” he added

Agyemang-Badu continued that although he wish the Black Stars could have progressed past the group stage, he is not surprised with the team’s elimination.

“If you look at how our football has been for the past two years when we started with the qualifiers to the tournament, I don’t think you will be too much surprised with the performance of the Black Stars, although I [thought] we were going to qualify from the group stages.”

“The things that happened two years back is what has manifested now. I’m not surprised because a lot is going on. We can’t say everything publicly. Trust me, what went on is the reason for this result. Preparations weren’t the best and a whole lot, he concluded.

Meanwhile, the aftermath of the Black Stars’ exit has been whether or not head coach Milovan Rajevac will maintain his role. The Ghana FA is set to meet on Wednesday, January 26, 2022, to discuss the future of the manager.