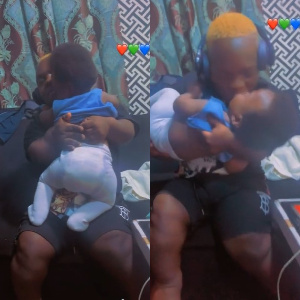 The self-acclaimed richest man in Africa and social media sensation, Shatta Bandle, has shared a video of a baby girl suspected to be his child.

The socialite, took to TikTok to share clips of himself with the baby in his arms as he showered her with kisses.

While trying to play with the baby, the socialite struggled to get a grip on the child who was almost the size of Shatta Bandle.

The baby silently latched onto the socialite’s shirt as he landed several kisses on her lips while they were serenaded with music playing in the background.

The minor, named Ayisha, was seen in bed with Shatta Bandle in a video that went viral on social media.

Mahama Haruna, uncle of Ayisha had earlier come out to accuse Shatta Bandle of raping and kidnapping Ayisha and was ready to meet him in court over the issue.

Some Ghanaians joined in on the conversation on the development on social media.

While some made fun of the whole incident, others were taken aback as they wonder how the allegations could hold water.

Meanwhile, Shatta Bandle has announced his innocence over the matter, stating that, nothing sexual happened between them.

He noted that the bedroom video was taken in the presence of many.

“I didn’t do anything, there are plenty girls inside the room there and we are doing that snap one by one. Even the time I go, I took my girlfriend go there self,” he explained in another video.

Corroborating Shatta Bandle’s narrative, Ayisha, has also intimated that the video was a harmless one because she took the photograph and video with a celebrity.