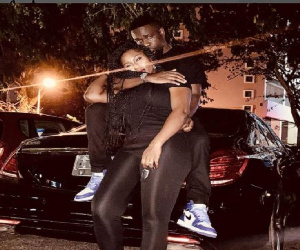 Rapper Sarkodie and his wife, Tracy

Sarkodie shares a video of his wife

Tracy and Sarkodie spotted in town

Sarkodie tags his wife as his crush

Rapper Sarkodie on Thursday shared a video on Twitter where he disclosed that he spotted his crush in traffic.

Being in traffic can be hectic, but one can forgo the stress when they come across someone that gives them butterflies in the tummy.

Ghana’s most decorated artiste could not hide his excitement, as he kept waving at the car until the occupant rolled down her glass.

He has established that the lady he waved at was his wife, Tracy Owusu-Addo.

The viral video has so far attracted over 3,300 likes and generated several comments from their fans.

“Met my crush hun traffic @TracySarkcess next time sort we out,” he captioned.

Tracy has since re-tweeted her husband’s post with love emojis.

This celebrity couple has been together since July 2018.

According to reports, they dated for close to 10 years before settling down as husband and wife.

Although they keep their family life private, the rapper and his wife, Tracy Sarkcess share images of their children Adlyn Owusu aka Titi and son, Michael Nana Yaw Owusu Addo Jnr on their social media pages during special occasions.

Met my crush hun traffic @TracySarkcess next time sort we out ???????? pic.twitter.com/jsvAAF2IlD