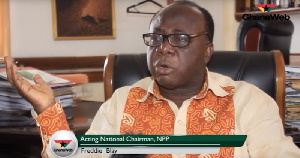 Freddie Blay, the National Chairman of the ruling NPP

Freddie Blay, the National Chairman of the ruling New Patriotic Party, has tasked Majority Members of Parliament, to be resolute and strategic in their dealings with colleagues on the Minority side.

He has tasked MPs of his party to do all it takes on their part to engage in consensus building efforts especially because of the nature of the current Parliament.

According to the former MP, open fights as witnessed in the chamber in 2021 were unacceptable: “We all recognize that violence has never been the way out of any conflict situation, but rather dialogue and consensus-building,” he stated.

Blay was speaking at the opening ceremony of a Two-Day Strategic Workshop organized by the Majority Caucus at Kwahu-Nkwatia in the Kwahu East District of the Eastern Region.

The gathering was to help MPs to brainstorm ideas ahead of the resumption of Parliamentary duties on January 25.

“Parliament is Parliament! And not a forum for brawls but rather coax them for debates. I would plead that we also tone down on the heated media banters between the majority caucus leadership and the Speaker of Parliament,” Mr. Blay stated.

Whiles advancing the issue of consensus building, he also warned that in a bid to return to power in 2024, the NDC MPs will seek to undermine the Majority and government through different means including use of propaganda.

“Let us try to always exercise much restrain in our reactions when responding to the vicious propaganda of the opposition NDC. Your colleagues in the NDC are determined to undermine you but you should be more resolute and strategic”.

“Our focus can remain on the minority leadership while we channel our energies towards making a good case for the Ghanaian people. I suggest you remain focused on your core mandate of pushing the government’s business at any moment with less drama,” he added.

By way of advice, he said: “As you return to Parliamentary duties next week, i wish to urge you to put your best foot forward. Use the experiences from the last year to make sure you work towards a productive consensus that would result in tangible deliverables for the government.”