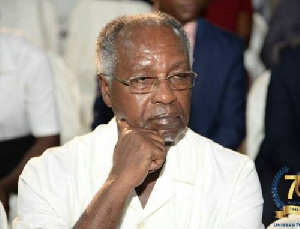 Professor Addae-Mensah, Former Vice-Chancellor of the University of Ghana

A former Vice-Chancellor of the University of Ghana, Professor Addae-Mensah has stated that the majority and minority caucuses in Parliament should learn to respect each other to foster a healthier atmosphere for parliamentary business.

Speaking in an interview on Accra-based Asaase Radio, he condemned the several fighting incidents that marred the first session of the 8th Parliament, last year.

According to the academician, the two sides must recognize their unique roles and build the needed consensus to drive development in the country.

“It is difficult to put one’s finger on the real problem but sometimes one is tempted to think that there is a problem of lack of mutual respect that is permeating through Parliament”.

He added, “I think that is what they have to address and do something about it as quickly as possible. Parliament fighting is not the best”.

“But it is not the first time it has happened. If there is mutual respect for each other, I think people will be more prepared to be tolerant,” he explained.

Professor Addae-Mensah made these comments in connection with the widely condemned fisticuffs, which characterized parliamentary proceedings last year.

The House had been on a break and will resume on January 25. Ahead of the recommencement, Professor Addae-Mensah wants the two sides to be more decorous in their exchanges.