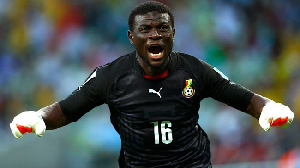 His comments comes on the back of the shambolic performance of the Black Stars at the AFCON ongoing in Cameroon.

Ghana were eliminated after losing their last group stage game to debutants, Comoros 3-2. The defeat to Comoros meant that the Black Stars failed to win a game in the tournament and also accounts for Ghana’s worst performance in the history of the AFCON.

A lot of Ghanaians have expressed their anger at the team after they took an early shower home.

“As a former player of the team, it is very sad Ghana got eliminated. I’m not sure the players are happy because this situation is very sad” he said.

However, according to Fatau Dauda who was Ghana’s safest pair of hands in the 2014 World Cup in Brazil, though it is very bad Ghana got eliminated, Ghanaians should forgive the team and start a plan for rebuilding.

“Ghanaians need to forgive them and start thinking of rebuilding the team for the future so that we can have the generation of past players of Essien Muntari and Appiah. If you compare those times to now, it is a new generation” he said.

He also revealed that Ghana has a lot of technically gifted players but the only way to get the better out of them is to bring them together as a unit.

“Ghanaian players are technically good but how to put the guys together is an issue. Black Stars don’t have the time to train as a club but once you are there as a player, you need to give your all,” he said.

The Black Stars will also lock horns with the Super Eagles of Nigeria in March for the World Cup playoffs.