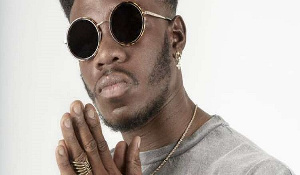 Popular Ghana-UK-based artiste, Jamal Abbas known in the music circles as A Star has shared that he initially started music at a tender age. He wanted to also make an impression of how good he could be as a rapper to his brothers during his young age.

The Kupe hit producer said he became popular in London, UK as he did more of the rap music growing up.

Speaking to Y107.9 FM’s Dorothy Cornelius on The Weekend Rush, he said,

“I’ve always wanted to be a musician growing up. I started off as a rapper, writing lyrics in my notebook in school at age of Eight. My brothers usually listened to Hip Hop so I wanted to be a rapper so that I can impress them. I started doing more rap music and became popular locally around London as a rapper.

A Star also disclosed he decided to switch from Rap songs to Afro Beats when the latter began to pop up on the international scene.

“I decided to delve into the Afro Beats music when it started to blow up around 2011 and since then I’ve just been running with it,” he added.

He also mentioned Medikal alongside the King of Pop, Michael Jackson as among other musicians who influenced him as a musician.

“Michael Jackson and it’s just him that influences my career as an artiste. For Ghana, it’s always Medikal for me. I feel like he’s the best artiste in the whole of Ghana, and he is also so talented. He can jump on anything you put to him. He can literally do drill and then Afro Dance tracks, Azonto too. He can fit into any genre, he’s so versatile,” he said.

He further disclosed the two have collaborated on a jam and is set to be released soon.