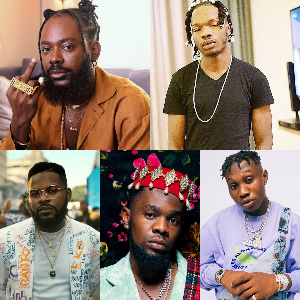 Nigerians stars who reacted on Twitter after Super Eagles loss

Ghana to face Nigeria in playoff

Super Eagles kicked out of AFCON

It looks like Nigerian’s hope for the Super Eagles was lost when they were booted out of the African Cup of Nations (AFCON) in Cameroon, on January 23, 2022.

Some Nigerian stars took to social media to express their pain and disappointment, especially on Twitter after they trolled Ghanaians.

On Tuesday, January 18, 2022, when the Black Stars of Ghana lost to Comoros ending their AFCON campaign with a draw and two losses and a point, Nigerian trolls were out in full force on Twitter.

In some comments made by some celebrities, Ghana and Nigeria are siblings who can’t go anywhere without each other.

Read below some reactions shared by some Nigerian celebrities:

Naira Marley in a post said he knew from the beginning when Nigerians met with the player from Tunisia called ‘Ifa’ they were set out to lose.

According to the Yoruba, Ifá is a system of divination. The word Ifa refers to the mystical figure Ifa or Orunmila, regarded by the Yoruba people as the deity of wisdom and intellectual development.

“From when I saw a player called ifa in tunisia team I knew we wasn’t gonna win. Referee head come be like orunmila,” he tweeted.

From when I saw a player called ifa in tunisia team I knew we wasn’t gonna win. Referee head come be like orunmila ????????

Nigerians artiste, actor and lawyer, Folarin Falana, better known by his stage name Falz, took to Twitter to share a series of tweets to express his pain after the Super Eagles lost to Tunisia.

The Yoruba statement translated into English meant “it hurts.”

Another artiste who shared that he was dealing with double loss was Patoranking.

The artiste shared that he was hurting because of the Super Eagles and Arsenal. The teams lost a game on the same day. For football lovers who support both teams, the pain was excruciating.

It didn’t turn out golden for Nigeria this time as Nigerian songwriter and artiste, Adekunle Gold took to Twitter to share join in the stars expressing their disappointment after the Super Eagle’s loss.

ZLatan shared a post without leaving out an emoticon to show his deepest feeling.

In a tweet shared by the artiste he said “Tunisia wan later chop our sweat.”

Ghana, destined to always clash with Nigeria has been fixed to play Nigeria in the qualifier that will gain the winning country a ticket to Qatar 2022.

The fixture between the two West African giants was determined at a draw held by CAF in Cameroon on Saturday, January 22, 2022.

After two initial stages of qualifiers, the possible contingents for Africa were pruned to 10 teams made up of Egypt, Cameroon, Senegal, DR Congo, Morocco, Nigeria, Tunisia, Algeria, Mali, and Ghana

A team emerging as a winner of the five fixtures drawn on Saturday will automatically gain a ticket to the 2022 Qatar World Cup as a representative of Africa.