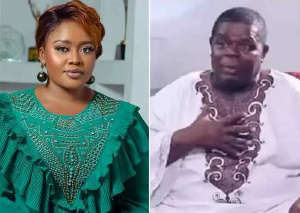 Veteran actor, Psalm Adjeteyfio (TT), has recounted an instance where someone who identified himself as MzGee’s house help wanted to offer him dog leftovers.

TT said in the midst of the ‘leaked audio’ brouhaha, he had a call from MzGee’s househelp whose sole mission was to mock and disrespect him.

He said the guy in question did not only mock him but showered him with insults and threats.

“Somebody called and said do I know who is speaking? I said no. Then he identified himself as Kwesi, MzGee’s househelp. ‘I watch over his dogs as well and I want to offer you some of their leftovers. Are you interested?’ I sat quietly for a while and ask if his brain is indeed functioning. Then the insults from him started to flow. He called me a stupid useless man.

“He also threatened to beat me mercilessly whenever we cross paths. He called me a fool and called me a lair for saying I purchased a car and two plots of land. In return I said God bless you, called him a stupid sheep and hanged up,” TT stated in an interview with Roseline Feli on Joy Prime.

When asked how such situations make him feel, TT said;

“In Ga, there’s a saying that a dead goat does not fear cutlass.”

Several individuals including social commentator, Kwame A Plus, have slammed Psalm Adjeteyfio for his incessant begging habit following the leakage of an audio where he was captured begging for leftovers from MzGee.

They have opined that TT shouldn’t have been in such a situation after receiving several donations from benevolent individuals including GH₵50,000 from Vice President Bawumia when he solicited help sometime in 2021.