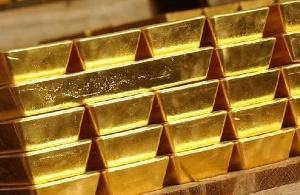 Gold held near the highest level in almost two months amid demand for an inflation hedge, while the bond market sell-off stalled and US equities continued to retreat.

President Joe Biden said it’s the Federal Reserve’s job to rein in the fastest pace of inflation in decades, and supported the central bank’s plans to scale back monetary stimulus.

The yield on 10-year treasuries slipped from the highest level since January 2020, while the S&P 500 fell 1% Wednesday.

Geopolitical tensions are also supporting demand for the haven asset. Biden said he thinks Vladimir Putin will “move in” on Ukraine after amassing more than 100 000 troops on the nation’s border, although he suggested a full-scale invasion may not be in the Russian leader’s plans.

The US president also said this week that he’s not ready to lift tariffs his predecessor imposed on Chinese imports.

Gold is holding above $1,800 an ounce after dropping for the first time in three years in 2021 as central banks globally started dialing back on pandemic-era stimulus. Still, bullion’s traditional role as an inflation hedge and the sell-off in technology stocks is supporting demand as investors seek refuge in the haven asset, according to Fawad Razaqzada, an analyst at ThinkMarkets.

“Gold is finally responding to high levels of inflation around the world,” said Fawad.

“It remains to be seen whether the latest breakout attempt by gold can be held, but now there are more compelling reasons why the bulls might hold their ground.”

The Bloomberg Dollar Spot Index was flat after dropping 0.2% in the previous session. Silver was little changed, while platinum and palladium retreated.