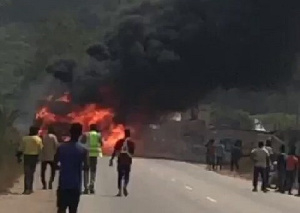 Deputy Chief Fire Officer in charge of Rural Fire, Owusu Adjei says security men and experts have committed to the Apiate area where the blast occurred to prevent another blast.

He explained that it is unclear whether some of the explosives were still buried in the area where the incident occurred hence the deployed experts would ensure the area is out of danger.

He told Nyankonton Mu Nsem on Rainbow Radio 87.5Fm that it is unclear whether there were some explosives buried in the earth.

But the experts and security persons deployed to ++the area would ensure that something like that is prevented, he added.

He disclosed that the security agencies will continue to work and prevent any unforeseen incident in the area again.

He commended the other security agencies for their commitment, dedication, and collaboration in being the situation under control.

He further extended condolences to bereaved families and families who had their members injured in the explosion.

He described the explosion as tragic.

He encouraged Ghanaians to desist from moving around scenes when tankers or any other vehicle catches fire.

Such incidents he explained could explode and kill them.