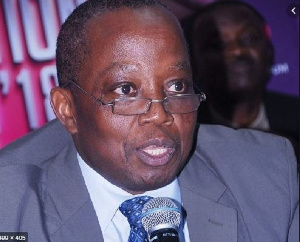 Private legal practitioner, Lamtiig Apanga, has averred that the removal of Daniel Yao Domelevo as the Auditor-General was to show him there’s a superior power above his.

According to him, the sacking of Domelevo may have been politically motivated as all the necessary procedures needed to be followed to warrant his sacking were not heeded to.

Mr Apanga explained that there are a lot of factors that are considered before sacking a public sector worker but in the case of the former auditor-general, he was quickly relieved of his post after launching an investigation on the Senior Minister at the time, Yaw Osafo-Maafo.

Speaking on JoyNews’ The Law programme on Sunday, January 23, 2021, the legal luminary said, “The law says you can’t do this unless there’s just cause. I mean the very recent situation is what we had with the Domelevo issue. It may not be direct, but one can deduce from the surrounding circumstances of what happened with the investigation of the Senior Minister and some of the findings and decisions he [Domelevo] made and the public outcry. Particularly, it was a way to show him where power lies.”

It would be recalled that in March 2021, President Nana Addo Dankwa Akufo-Addo retired Daniel Yao Domelevo as the Auditor-General of the Republic, claiming documents available to him suggested Mr Domelevo had reached his retirement age.

Mr. Domelevo before being retired was forced to go on leave.

Reacting to several reports on the sacking of Domelevo, President Akufo-Addo said he simply followed the law.