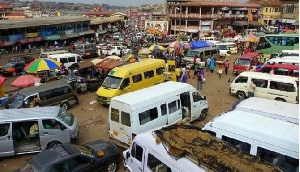 File photo of a lorry station

The Ketu South Municipal Assembly has hinted at plans to relocate the main lorry station from around the Aflao border to a new place that will soon be constructed.

The new modern lorry station will be situated on an eight-acre land designated as “China Geo” at Laklevikope near the Nurses’ Flat.

Opposite the China Geo is the land reserved to be used as taxi rank to complement the yet-to-be constructed new Aflao lorry station.

Mr Maxwell Koffie Lugudor, Ketu South Municipal Chief Executive, who disclosed this during a visit by the Volta Regional Minister and his team, said the Assembly was looking for funds for the project to help decongest and beautify the border area.

“When the new lorry station is constructed, the current main Aflao Lorry Station will be moved there. Vehicles coming to Aflao will disembark passengers there for the taxi service which will be directly opposite the lorry station.”

The MCE explained that after the relocation of the lorry station from its current location, the place would be used as a private car park for visitors and travellers intending to cross the Aflao Border into neighbouring Togo and other African countries east of the country.

He said this would ensure orderliness around the Aflao border, the country’s busiest land border and hoped the Assembly would secure funds as quickly as possible to enable it to carry out the project.

Mr Archibald Yao Letsa, Volta Regional Minister, called on the staff of the Assembly to improve on revenue mobilisation in the Municipality to cater for the needs of the people.

He said Ketu South, which is an important Assembly to Volta Region and Ghana, had huge economic potential.