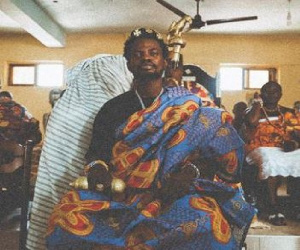 Singer Fameye is the Wassa Nyankonton

I will cut short my vacation to support victims of Apiate explosion, Fameye

Musician, Fameye who doubles as the Wassa Nyankonton, has commiserated with families and victims of the deadly explosion that occurred in Apiate on Thursday, January 20.

The incident claimed the lives of 17 people, injured 59 others and destroyed several properties running into millions of cedis.

Reacting to the devastating accident, Fameye who is a sub chief in the area has announced that he will be cutting short his vacation abroad to show his support to the victims.

Speaking on Newsday on TV3, the award-wining singer noted that he received several conflicting reports of the Apiate explosion and had to contact his sources back home in Ghana.

“I saw the news last night but I didn’t want to post anything about it because most at times when these issues happen everyone has what he or she will say. So I had to wait and call people from the town to verify if it is actually true.

“Before, I saw people putting up figures that 100 and 1000 people have died but I realised that there were people who were saved and people who died. A whole community is down.

“Apiate is one area that I know. I have been there before, it is not in Bogoso but it is just close to Bogoso. It is just like Bogoso is the capital of these towns,” he noted.

Back in November 2021, traditional rulers in Wassa, led by Nana Sompre II, enstooled the musician as the Wassa Nyankonton where he swore his allegiance to the people.

Fameye has pledged to seek help for residents of Apiate and also embark on a campaign to gunner support for their safety through his music.

“Being the Nana Wassa Nyankonton makes me feel like I have a lot of responsibilities. I have to rise to the occasion. This is too much, this has never happened before. A whole community, everything is down. Right now I am not in town but because of this, I think I will be coming today or tomorrow. I will have to go there and talk to the people and let’s see how far we can go with that.”

He furthered: “For me being an artiste, I think the little I can do on my side is through my music and talking to few people that can come on board to support these people because emotionally and psychologically a lot of people are down. Even though it didn’t happen to the people of Bogoso, those people (Apiate) are part of Bogoso. Through my music, I think a lot is going to be done.”

Background of the Apiate explosion

According to the Ghana Police Service’s situational report of the Thursday afternoon explosion, there was an accident involving a DAF truck with registration number WR 2252-18, that was transporting explosives from the MAXAM Company, Tarkwa, to Chirano Gold Mines and a motorcycle.

The rider of the motorcycle, the Police said, was from the opposite direction of the road, and rode under the oncoming vehicle at around 1.25 p.m.

Due to the impact of the crash, the motorcycle caught fire and ignited the explosives on the DAF truck before it burst into flames.

“D/Cpl Isaac Kamanim of Firearms Unit/Tarkwa was escorting explosives from MAXAM Company, Tarkwa, in a DAF van with registration no. WR 2252-18 driven by Alfred Pappoe to Chirano Gold Mines in the WNR.

“At a section of the road between Bogoso and Bawdie, a motorcycle rider from the opposite direction ran under the van carrying the explosives. The driver sustained a deep cut on the head and was rushed to Government Hospital, Tarkwa. The Police escort escaped unhurt,” the Police report indicated.

The motorcycle rider, on the other hand, died with some other victims from the village while some nearby buildings were razed down by the explosive fire.

“Extensive damage was caused to a nearby ECG transformer,” the Police said further.

The Ghana Police Service later deployed some officers from the Crime Scene Intelligence and CID Operations to the scene of the incident.