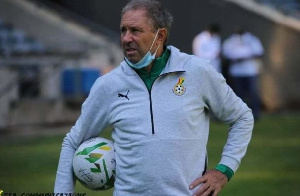 Following reports of the sacking of Black Stars head coach, Milovan Rajevac by the Ghana Football Association, some Ghanaians have taken to social media to express their feelings about his ousting.

The sacking of Black Stars head coach who returned after leaving the job some ten years ago seem to have met the expectations of many Ghanaians reacting to the news.

His sacking although not officially communicated to the public by the FA resulted from a meeting between the Ministry of Sports and the GFA following the abysmal performance of the team at the ongoing African Cup of Nations in Cameroon.

Milovan Rajevac led Ghana to its worst performance in the AFCON tourney at the ongoing edition in Cameroon.

The four-time AFCON champions managed to pick just a point in the competition in Group C with Morocco, Gabon, and Comoros.

Ghana lost to Morocco and debutants Comoros in the group stages to exit the competition.

Multiple sources including award-winning sports journalist, Saddick Adams have announced the sacking of the Serbian gaffer.

See some social media posts in reaction to the sacking which is expected to be officially communicated to the public by the GFA later in the day below:

All the best to the next coach of the Ghana Black stars, I will be watching.

Sacking Milovan Rajevac is not a panacea to our football distress.

I don’t know where the majic was suppose to be coming from with these average performing players.

Talk is Ghanaians and they do it better!

Sacked. It took too long self.

How did anyone expect us to accept what Milovan Rajevac served us in Cameroon? How did anyone believe that they could talk us with excuses into believing after the evidence in Cameroon that we were going to get any better under the Serbian?

Based on info I picked, the Govt was clear with the GFA on two things.

FA have reluctantly AGREED in principle but let’s wait. FA will come out with their decision