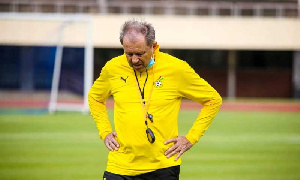 Head Coach of Ghana’s Black Stars, Milovan Rajevac has been given a sacking order by the Ghana Football Association.

His sacking although not officially communicated to the public by the FA resulted, from a meeting between the Ministry of Sports and the GFA following the abysmal performance of the team at the ongoing African Cup of Nations in Cameroon.

Details obtained by GhanaWeb sources from the meeting on Friday indicates the Ministry on behalf of government ordered the sacking of the coach and the entire management team of the Black Stars.

Although the position by the ministry was met with resistance by the FA officials, the Sports Ministry lead by the Minister, Mustapha Ussif insisted on the sacking.

Milovan Rajevac lead Ghana to of its worst performance in the AFCON tourney at the ongoing edition in Cameroon.

The four-time AFCON champions managed to pick just a point in the competition in Group C with Morocco, Gabon and Comoros.

Ghana lost to Morocco and debutants Comoros in the group stages to exit the competition.

A statement from the Ghana Football Association announcing the sacking is set to be released by midday.