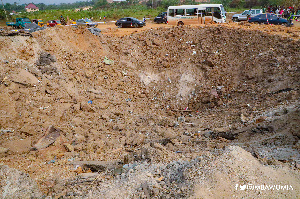 The town of Apiate continues to dominate the national news headlines over a national tragedy that has claimed lives and caused mass destruction.

When a motorcycle rammed into a truck carrying mining explosives, the resulting impacted ignited a fire and set off the explosives headed for Chirano Gold Mines in the Western Region.

There has been a national response and continued outpouring of condolence and solidarity directed at the people of Apiate and adjoining towns, as they process the chaos they have been plunged into.

Government has also moved to provide all the necessary support through mandated institutions.

GhanaWeb outlines major issues we know from the incident so far:

The Minister of Lands and Natural Resources, Samuel Abu Jinapor via a statement of January 21, 2022, ordered the interdiction of the Chief Inspector of Mines.

The interdiction order it stated was to take immediate effect, “pending the outcome of the ongoing investigation into the tragic events that took place at Apiate.”

Furthermore, the license of a trucking company involved in the transporting of mine explosives be suspended.

The suspension of Maxam’s registration according to the statement precludes them from the, “manufacture, transportation and/or supply of explosives for mining operations, pending the outcome of investigations into this matter.”

Both orders are to be executed by Chief Executive Officer of the Minerals Commission.

The Municipal Chief Executive (MCE) for Prestea Huni-Valley, Dr. Isaac Dsamani, the Ambulance Service and a Ministry of Information statement of January 20 reported that 17 people had died from the incident.

But addressing the press on Friday, January 21, the Director-General, Public Affairs Directorate of the Police Service, ACP Kwasi Ofori aid the figure had been revised downwards to 13.

He explained how n why: “It was misreported that they were dead but when they were taken to the hospital, the medical officers certified that they were not clinically dead and as such, they were admitted and treatment is ongoing. So it is 13 and we should take note of that.”

The Vice President Dr. Mahamudu Bawumia led a National Emergency Response team to Bogoso on Friday January 21, 2022 to get first-hand details of the accident and also to commiserate with the victims and families of the affected.

Some of the major takeaways from his visit included:

1 – Government will foot bills of all injured persons

Read the full statement from the Ministry:

According to the Ghana Police Service’ situational report, the accident of January 20, 2022, happened around 1:25 pm at Appiatse, a town close to Bogoso.

Specifically, it involved a DAF vehicle with registration number WR 2252-18 transporting explosives from the MAXAM Company, Tarkwa, to Chirano Gold Mines and a motorcycle.

The impact of the motorcycle ramming into the truck caused a fire that ignited explosives on the DAF van causing it to burst into flames.

Other details from the Police statement

“D/Cpl Isaac Kamanim of Firearms Unit/Tarkwa was escorting explosives from MAXAM Company, Tarkwa, in a DAF van with registration no. WR 2252-18 driven by Alfred Pappoe to Chirano Gold Mines in the WNR.”

“At a section of the road between Bogoso and Bawdie, a motorcycle rider from the opposite direction ran under the van carrying the explosives. The driver sustained deep cut on the head and was rushed to Government Hospital, Tarkwa. The Police escort escaped unhurt,” the report indicated.