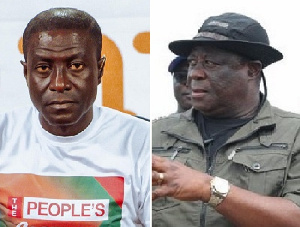 Minister vows to deal with detractors via courts

Mr. Kwasi Amoako-Atta, the Roads and Highways Minister has opened up for the first time about how and why he reported outspoken government critic, Captain Smart, before the Criminal Investigation Department (CID) of the Ghana Police Service in August 2021.

According to him, he looks forward to prosecution of a case in which the CID have recently stated that they have evidence to the effect that, Blessed Godsbrain Smart, popularly referred to as Captain Smart, had allegedly “accepted a bribe,” supposedly to bribe him [the Minister].

Speaking for the first time in a radio interview on Accra-based Oman FM on Wednesday, January 19, 2022, Amoako-Attah revealed that he was informed by the attempted bribery allegation which was first made on Oman FM’s sister channel, NET 2TV.

He disclosed that he requested for a tape of the said allegation before ordering his lawyers to formally file a complaint against the said journalist.

Amoako-Attah stated that he was reacting to the issue for the first time because it had reached a stage where the CID have completed preliminary investigations and are of the view that pressing charges will be in order.

“The woman’s account was made on-air and remained an allegation and I directed my lawyers to approach the right quarters, CID headquarters, for the truth to be investigated as to whether she indeed made the bribery to Captain Smart and whether or not it was transmitted to me.

“We wrote to the CID and the report is out. After a thorough investigation as to whether I received some bribes, I am fully exonerated and Captain Smart indeed took the money with intent to bribe me,” he noted.

He stressed that he was looking forward to the CID prosecution especially as the reported dated January 13, 2022 absolves him of any wrongdoing.

“If you look at the CID’s conclusion, they are ready to pursue prosecution. Just yesterday, my lawyers have written to CID HQ that we are looking forward to prosecution.

“They should go to court, that is where all parties have another opportunity to clear their names. So that is the matter,” he told the show host.

The Police CID via an official statement said they will press charges relating to defrauding by false pretences and accepting and giving bribes to influence a public official against the journalist.

The issue relates to an allegation that started last year on Net2 TV, that a businesswoman had approached Captain Smart with the view of he helping her influence the Minister over a land that she was interested in.

The Minister was the one who lodged the case with the Police after the allegation was reported in the media.

Captain Smart in his response has accused the government of using such frivolous matters with the view of gagging him, he said on the January 19 edition of his programme that he remained undaunted by the scheming.

“That a person of my stature has been given GHC10,000 to go and influence the Roads Minister. Can you imagine this rubbish? If so, then the Minister is very cheap. That I should influence him with GHC10,000.

“How is it that since 2018, you are now pursuing this matter in 2022. I swear that I have no idea about that nonsense that is aimed at just implicating Captain Smart,” he submitted