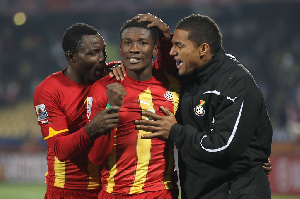 Former Mayor of the Kumasi Metropolitan Assembly, Kojo Bonsu has advocated for the return of Ghanaian duo, Kevin-Prince Boateng and Kwadwo Asamoah to the Black Stars.

Kevin-Prince Boateng and Kwadwo Asamoah have been out of the Black Stars team for the past couple of years due to different reasons but Kojo Bonsu believes that the country still needs the service of the duo.

Kojo Bonsu’s request comes on the back of the Black Stars’ Group stages of the 2021 Africa Cup of Nations after losing their final group game against the Coelacanths of Comoros.

“We have players like Kevin-Prince Boateng there, Kwadwo Asamoah, Jonathan Mensah, a lot of players out there. Let’s bring all of them, play a lot of friendlies before March or April when the qualifiers [World Cup] take place,” Kojo Bonsu said in an interview on Kumasi-based LUV FM.

“Let’s get in a coach like Sellas Tetteh for him to come and pick the players,” he added.