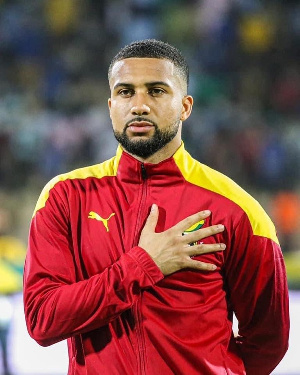 Comoros knock out Ghana from AFCON 2021

Black Stars midfielder, Daniel Kofi Kyere, has apologized to Ghanaians after the team’s poor performance at the 2021 Africa Cup of Nations.

Kyere who made his debut Africa Cup of Nations debut won the hearts of Ghanaians with his dedicated performance in the two games he featured.

The Saint Poli midfielder took to Instagram to write his apologetic message, indicating that the team let the nation down but believes there is more to fight for in the future.

“There is no excuse for our performance in this tournament, we have disappointed our country and the people who believed in us. There is no time to talk much but time to show that we will do it better in the future.” he wrote on Instagram

“I believe where one door closes, another one opens.

So we have to keep moving and trust God‘s plan. This is the beginning of a new chapter” he added

The German-born Ghanaian his debut for the Black Stars in 2021 under head coach, Charles Kwabla Akonnor.

Ghana at the 2021 AFCON managed just a draw from the three games they played, losing the remaining two to Morocco and first-timers Comoros.