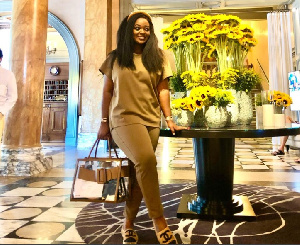 Award-winning actress, Jackie Appiah, has shared a stunning picture of herself days after veteran actress, Adwoa Pee, claimed she abandoned her.

The actress presented herself in a simple but expensive designer clothe, in a spacious room, and shared it on her Instagram page.

The photo has since gotten her fans and colleagues in the industry showering her with nice words.

In the picture that came without a caption, Jackie is seen wearing a smile even as she looked away from the camera.

Celebrities such as Prince David Osei, Rachael Okonkwo, Uzee Usman and Luchy Donalds, all shared their admiration for the actress beneath the photo.

Actress, Helena Maame Adwoa Petreba Pieterson, earlier this week shared how she was saddened over a treatment meted out to her by Jackie Appiah in 2018, recalling how the young actress she refers to as a daughter turned her back on her at the time she needed her the most.

Adwoa Pee, as the veteran is affectionately called, said in an interview with Step 1 TV that she was cash trapped after she was admitted to the Korle Bu Teaching Hospital in 2018.

Considering the severity of the situation, she decided to place calls to friends, family, and colleagues in the industry, including Jackie Appiah, only for the young actress to hang up on her.

Several attempts to re-establish contact with Jackie Appiah, according to Adwoa Pee, proved futile, making her wonder what offence she committed to have been treated in that manner by her own. Adwoa Pee, in that interview monitored by GhanaWeb was certain the actions of Jackie Appiah were deliberate.

Black Sherif hints at being depressed

Ghanaian Hiplife and Trap star, Mohammed Ismail Sherif, popularly known as Black Sherif has shared a post hinting how much he desires his life before stardom.

According to the artiste, he mentioned four things which included how much he missed his life when he wasn’t a star and prays he sails through life’s battles to meet the new him.

“I liked it more when my life was mine, when I used to enjoy living in fear because it became my routine, when I felt safe being real and hopefully I sail through these all to meet a new one,” he listed.

It can be assumed that the artiste may be having a hard time dealing with being in the public space and feeling the pressure of stardom like most stars encounter.

This has been the case for many stars. In Ghana stars such as Sarkodie, Gyakie, among others.

Popular singer, Sefa, in a previous interview mentioned the pressure that came with her title as she bemoaned the habit of Ghanaians treating celebrities like supernatural beings.

The Black Avenue Muzic signee said that just like every ordinary Ghanaian, celebrities are also prone to pain and depression.

Touching on the unnecessary trolls they are often usually subjected to, Sefa said Ghanaians act as though they (celebrities) do not have the right to feel pain.