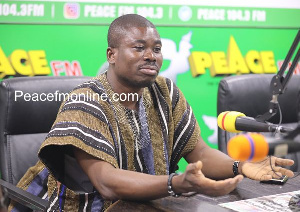 Former Head of Monitoring Unit of the Forestry Commission, Charles Owusu, has charged the police to hunt for the supplier of explosives that caused a tragic explosion at Appiatse in the Bogoso District of the Western Region on Thursday.

According to a statement signed by the Minister for Information, Kojo Oppong Nkrumah, about 59 injured people have been rescued from the rubble with the help of the Police Service, Fire Service, the Municipal Authority and residents.

“As at 17:00 hours, a total of seventeen (17) people have, sadly, been confirmed dead, and fifty-nine (59) injured persons had been rescued, bringing to seventy-six (76) the number of persons known, so far, to have been affected by the tragedy. Out of the fifty-nine (59) injured persons, forty-two (42) are receiving treatment and some in critical condition”, the statement indicated.

Charles Owusu has questioned why the supplier of the explosives is free when he must be behind bars being interrogated on why he allowed the explosives to be on a truck without putting any safety measures in place.

To him, ”the Ghana Police must look for the supplier, arrest and prosecute the person because we can’t let these many people just lose their lives”.

”Did the person follow the safety measures or not? Has the person been arrested to aid investigations or because he is a big man, he hasn’t been arrested? Or because he has money, so he can send explosion to move on the road without all these safety measures for people to die whereas he sits comfortably in his home eating fufu or banku or drinking tea while people have lost their children and family? We want to know where that person is at this very moment!”, he exclaimed.

He bemoaned Ghana’s system of imprisoning people who commit less crimes like stealing a goat while a person causes a whole community to be razed to the ground but isn’t arrested yet.

”I’m not sure it’s not only prophecy statements that you issue and those who have been invited with probing prophecies that someone has given to find out if it’s against the law or not. Prophecy doesn’t kill a person but we say it creates fear and panic. This is not creating fear and panic but rather human lives have been lost and we demand to hear from the Police today regarding their investigations”, he said on Peace FM’s ”Kokrokoo” Friday morning.